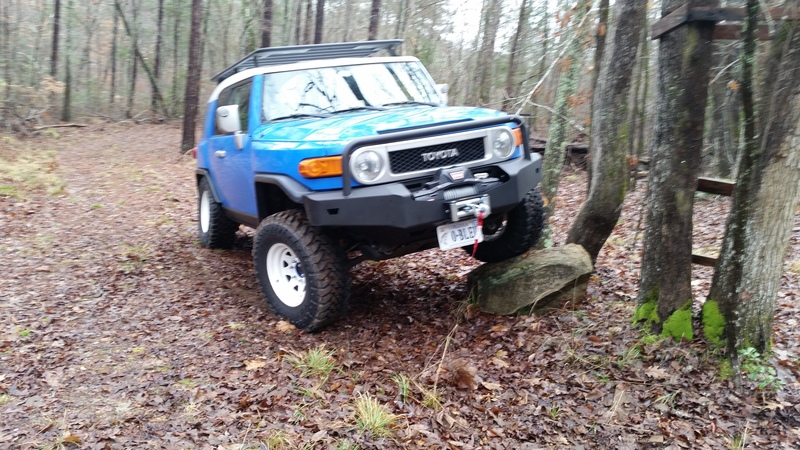 For the past 6 years or so I have been looking at all the cool mods people do to their FJ’s and now that Ole Blue is paid off I am going to get started on mine.


I basically picked out everything I wanted to do this round, and ordered in one big wack with the exception of the radio and backup camera (the wife’s request) was installed/purchased locally at Best Buy and the Spidertrax wheel spacers. So here is a list of everything I bought. 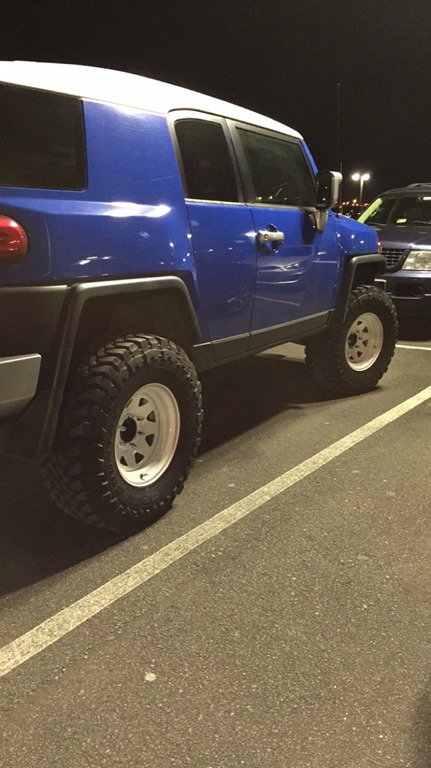 The worst part of this whole build is how long it took to get all of the parts. The worst of all was the Old Man Emu suspension kit…I guess they had to ship it all the way from Australia haha. I ordered on 10/12 and if finally came in 11/20. The only good thing that came from the order taking so long is my wheels came in a couple of weeks sooner. I did a test fit and found out they were not going to fit without spacers so I was able to order and receive the spacers before the suspension kit made it in.

I dropped it off at the auto shop that Monday afternoon so they could do the lift kit, wheel spacers and rims. It was looking pretty good already. The feel was totally different than the stock set up for sure. It feels like it floats now, not sure if that is normal or not…, but the worst part was some intense wheel rub at full turn. That is when I learned what the acronym BMC stands for…body mount chop. 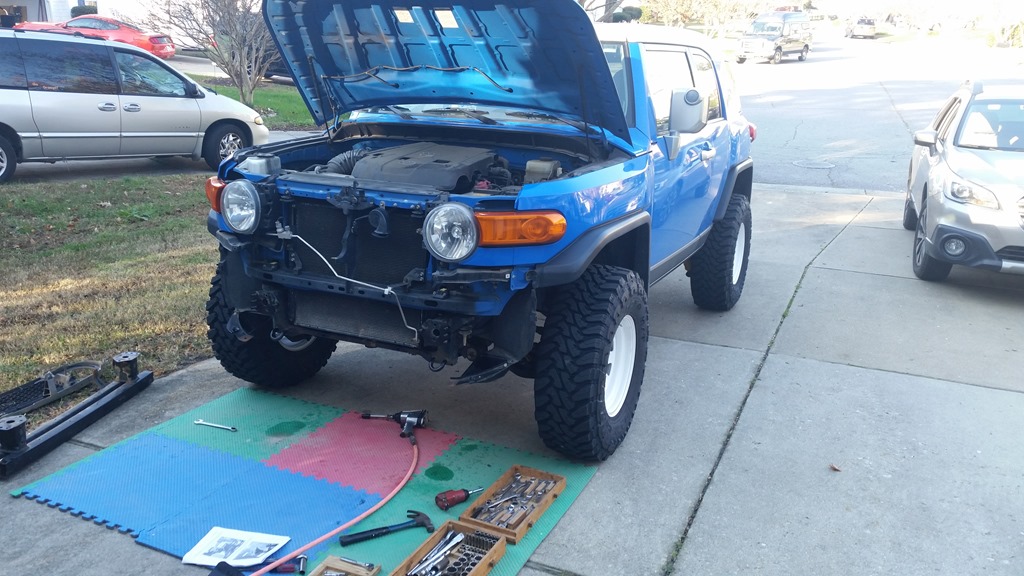 The way everything paned out let me take my time and install the rest of the stuff over Thanksgiving weekend. I started with the Warn Winch Bumper. This bumper went on so easy other than a few hard to reach bolts. The best part was their instructions. 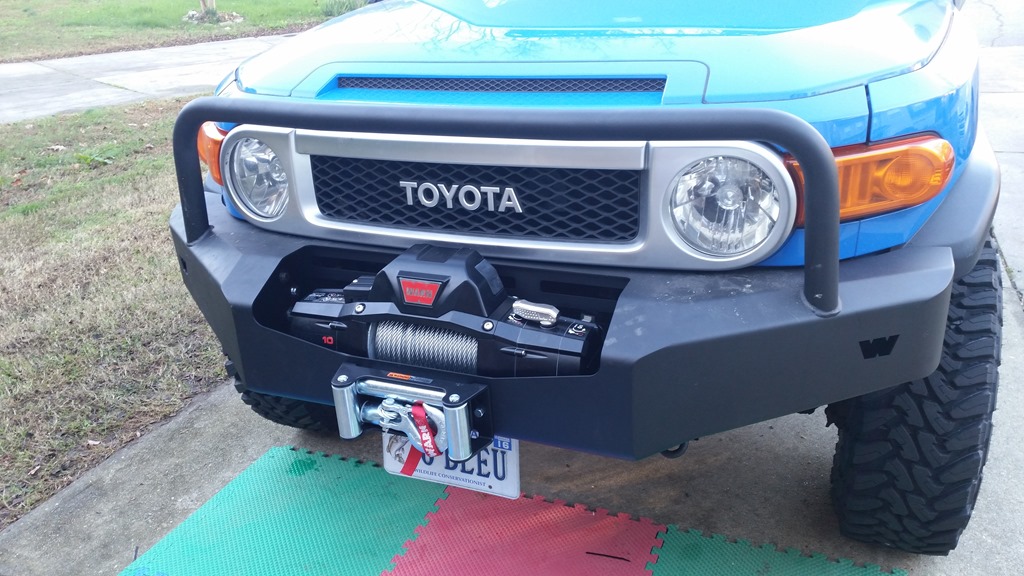 I have never used anything quite as detailed, from start to finish it pointed out every nut, bolt, and plastic clip that had to be removed or inserted. 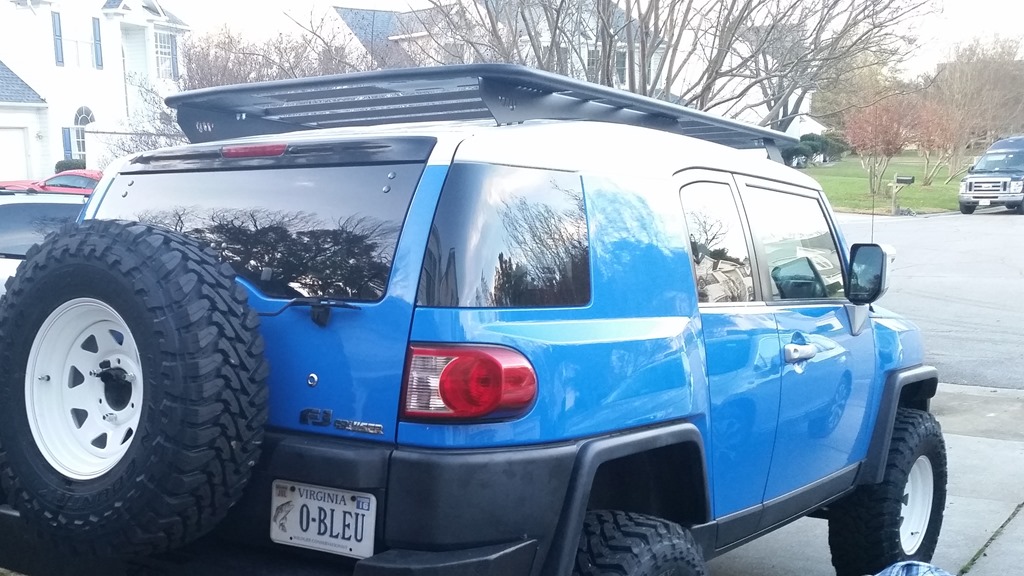 Next I installed the Warrior roof rack. The only modification I had to do was to cut away a small portion of the channel trim so the mounting brackets would fit in nicely. Their instructions weren’t too bad, but there is one misleading section as far as which is the front of the rack…the picture shows one way and the wording in the directions are opposite. As I am writing this I believe I have it installed backwards! ARgggghhhh 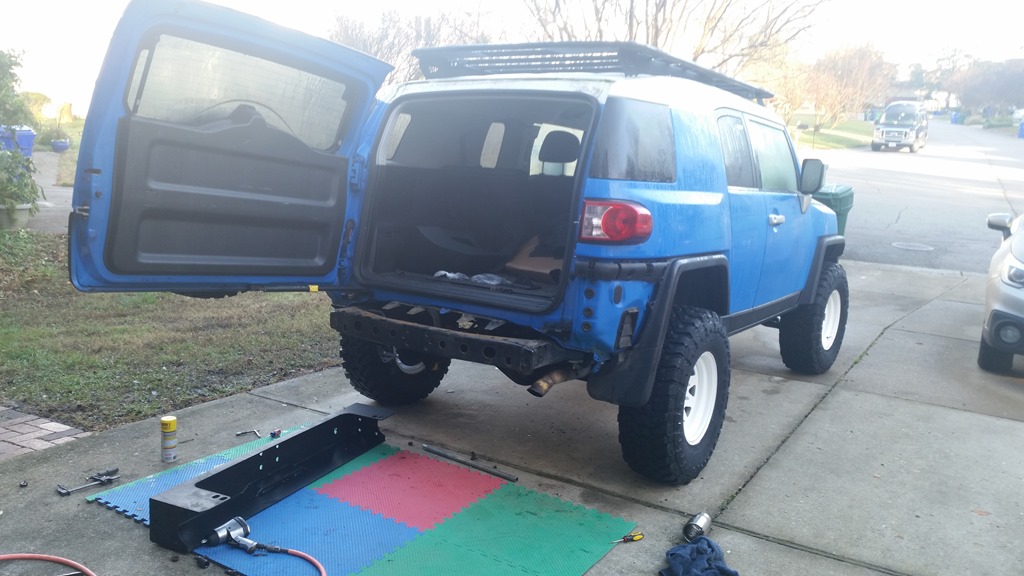 The Body Armor rear bumper was next. Even though there was way less work required to install this bumper as compared to the front bumper, it was way harder. It was just awkward to hold in to place, I had to cut the plastic fender because some of it remained, and I had to remove/repaint my trailer hitch mounting assembly. 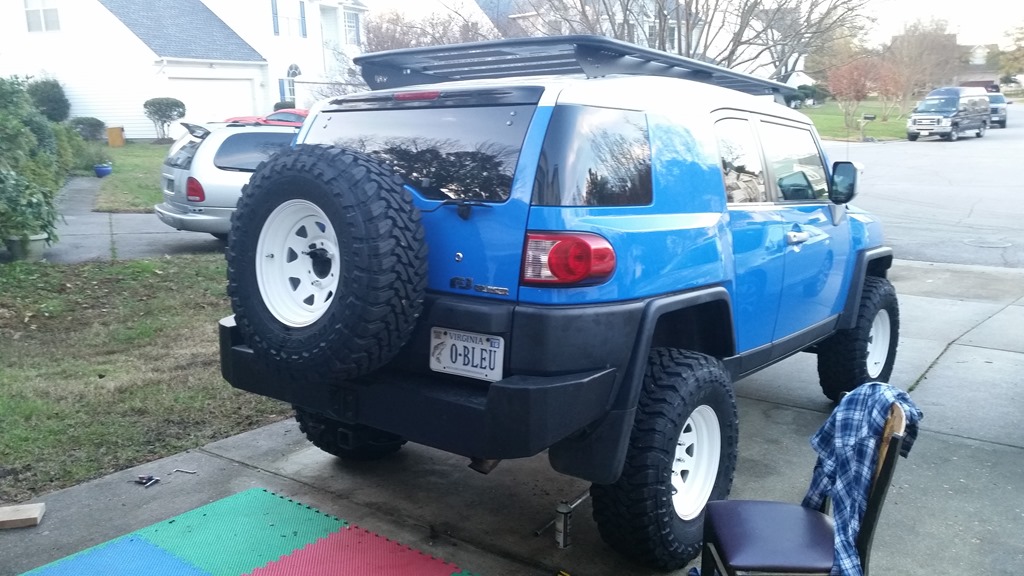 It went on okay and really probably needs some shims here and there and maybe some sledge hammer modifications to it so it mounts a little straighter…but it is not too bad, so it is staying as is for now. 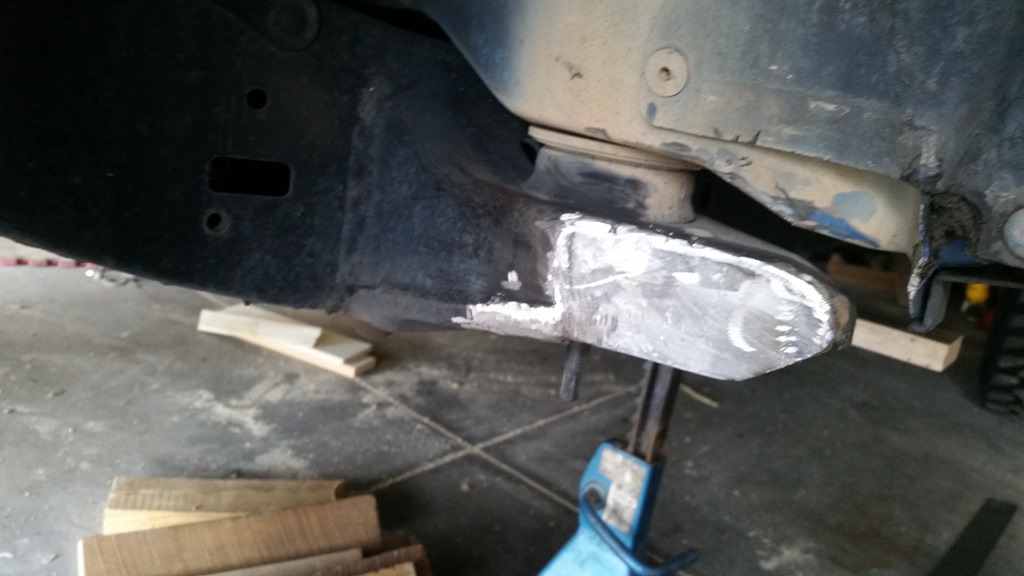 Finally the body mount chop or BMC as folks in the know call it. This part was mildly terrifying to me, so after hours of reading online I committed to do it. The best part, I got a welding machine out of the deal. It is a cheapo Harbor Freight 120 volt flux core wire feed welder I picked up on sale for 85 bucks and it did a fantastic job. I was pleasantly surprised. 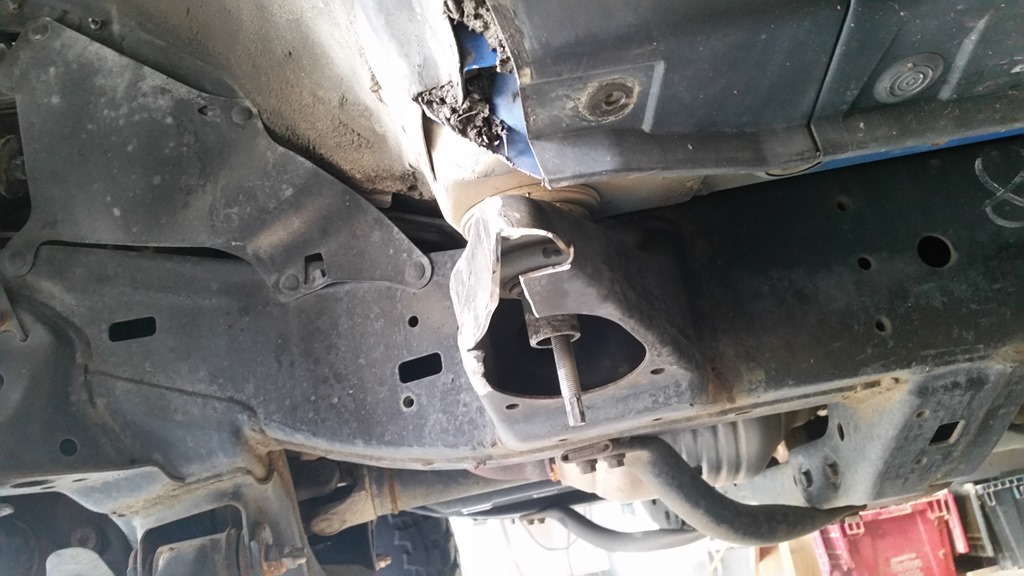 This job wasn’t nearly as bad as you might think. It was dirtier than hard. I will keep an eye on the mount to make sure it doesn’t crack or start rusting in the future. 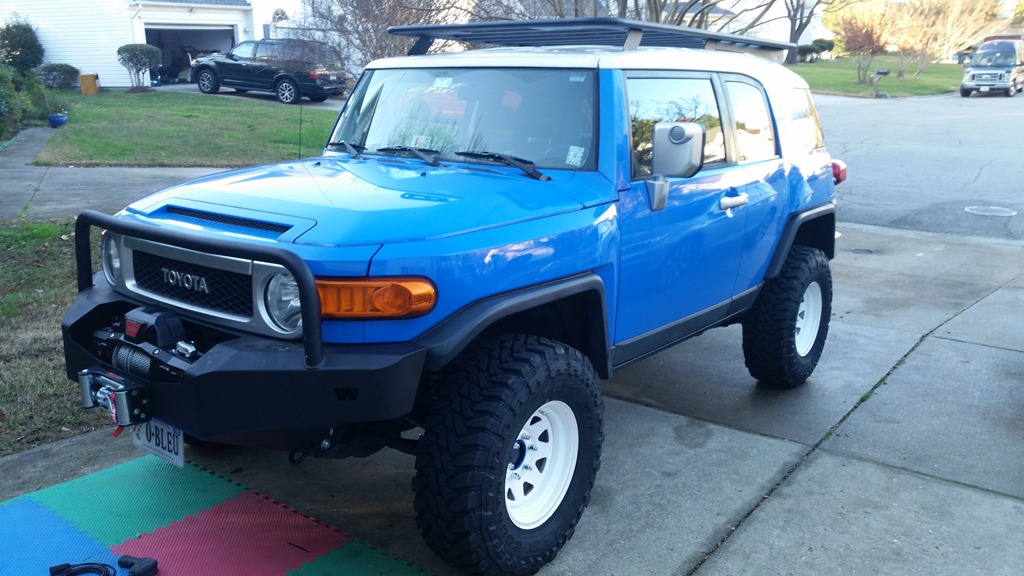 All in all this was not a bad build. Other than the suspension kit, tires and wheels I did it all my self with a little help from friends. I am not in the best of shape and was super sore at the end of the day, but it was fun and I have no regrets. I think Ole Blue has officially earned its name.