History of the Bungalow and Bungalow Property 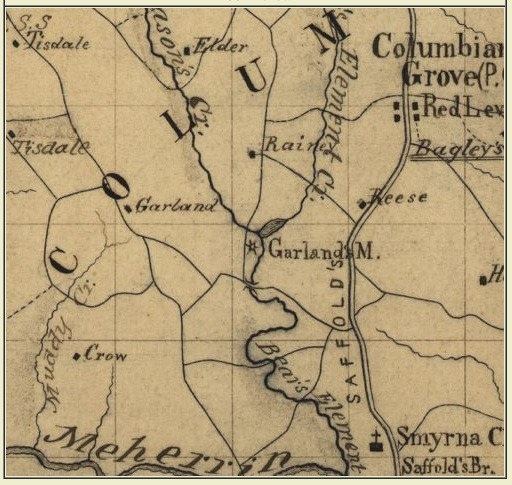 The history of the Bungalow property, which has one large gristmill that was erected nearby, a smaller mill built in the center of the creek along with a hunting lodge built on the property referred to as “The Bungalow” by the locals, dates back to times before the Revolutionary War. 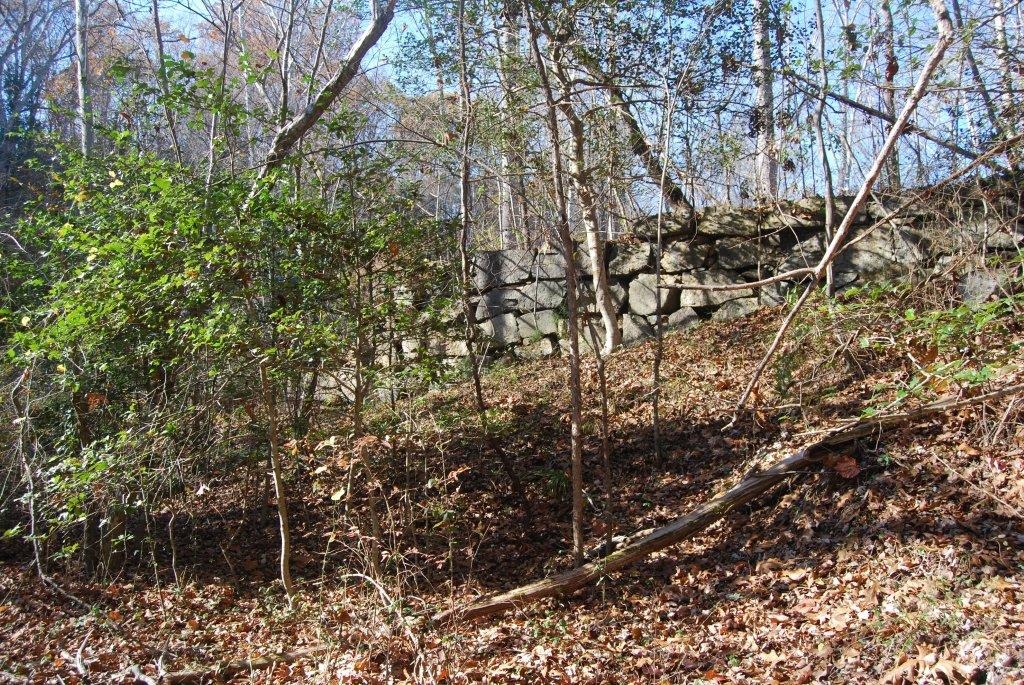 Some of the earliest history mentions that British merchants sued David Garland, an early owner of the property, for his estate before and during the Revolution. He owned a fairly large gristmill just across Bears Element Creek to the north of the property near where Mason Creek and Bears Element meet.I have scouted the area and located the remainder of the large dam and a man made sluice that directed the water down the hill to where I believe the mill was built. Part of the dam can be seen in this photo 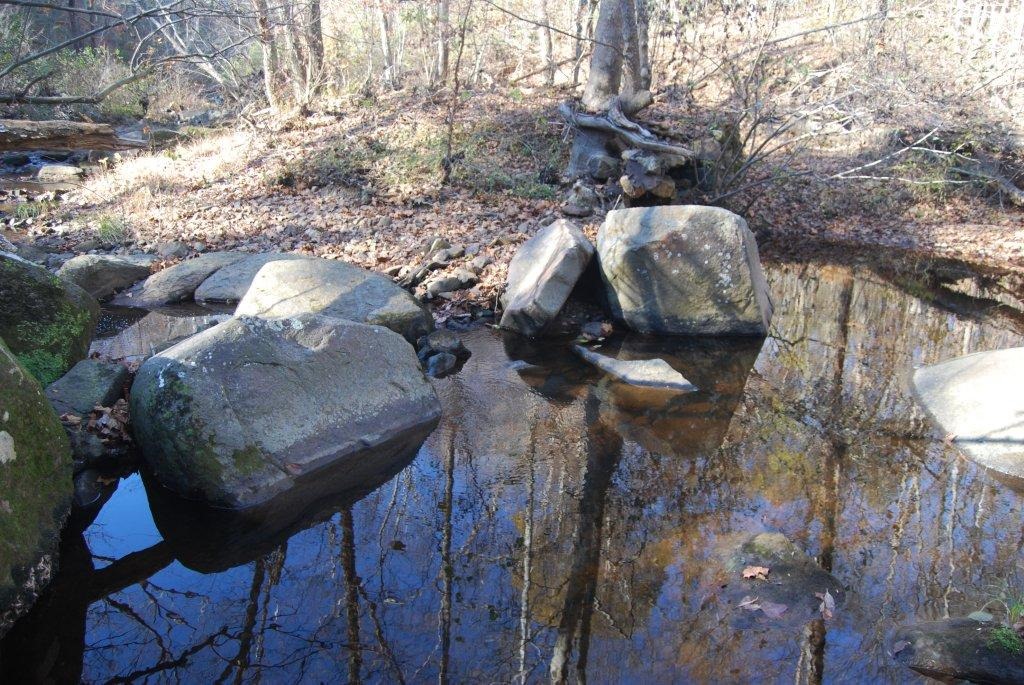 There are also remnants of a smaller mill that was later built in the middle of Bears Element Creek. All that remains of this mill is part of the metal shaft and portions of the dam and foundations.

David Garland at some point sold to the Bagley’s who I believe were the owners of the smaller mill on the property. I am not sure when that transaction took place or how long the Bagley’s owned the property but when they sold to Dr. Leo John Greulich, the “Bungalow” was born.Dr. Greulich was a very well off entrepreneur from New York who owned several businesses, lived a luxurious life style, enjoyed traveling, hunting, and making money. He was born in Dayton Ohio circa 1877 and married his first wife Ms. Agnes F. Spicer in 1903 who was the daughter of John Spicer, founder of the town of Spicer in Minnesota.Shortly after their marriage, Dr. and Mrs. L. J. Greulich made there way down to Lunenburg, VA to vacation at the Mecklenburg Hotel of Chase City, which had just been built between the years 1901 and 1902. 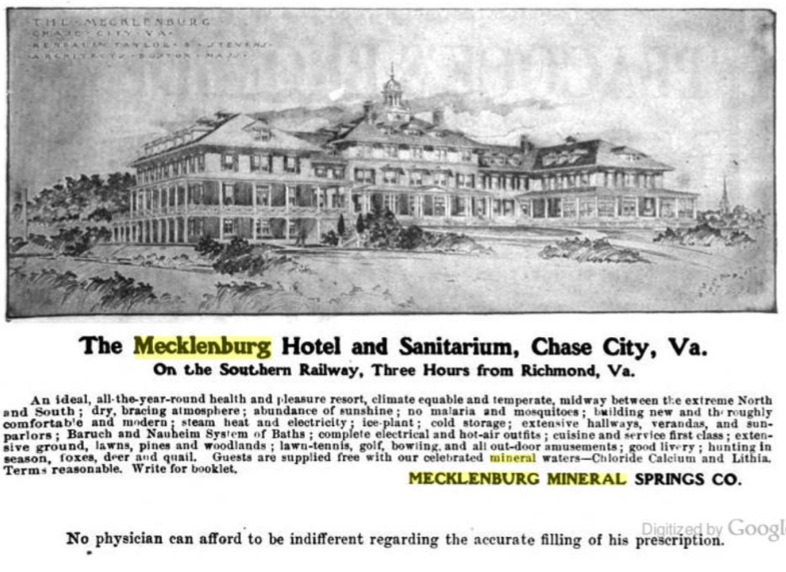 The Mecklenburg was initially made famous by the well-known mineral waters of the area believed to have medical and healing properties. This water was bottled and shipped all over the country. There were several ads for the Mecklenburg and the famous mineral water in the New York Herald, the same paper Dr. and Mrs. Greulich were frequently written about in the Society section. I often wondered what would bring Dr. Greulich to Lunenburg, VA and after a good deal of research, it was fairly obvious the Mecklenburg hotel is what brought the Greulich couple to the area. The question is why did they choose the Mecklenburg. 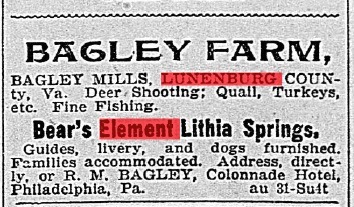 Initially in my research I leaned toward hunting as the draw to bring the Greulich couple to the area and while I believe that was certainly a large part of why they chose the area, I feel it was actually the famous mineral waters of the area that lured them to Chase City, VA. 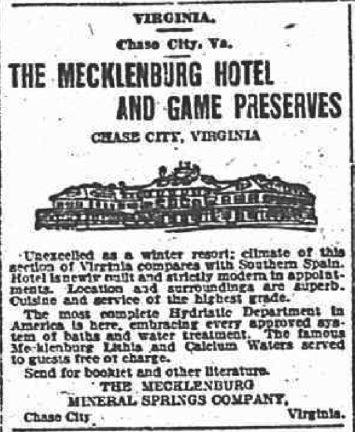 This assumption was due to the fact that Dr. Greulich’s wife had declining health issues and the famous mineral waters were thought to have healing properties.

This is one of the best articles I ran across.

It is Dr. Greulich’s Father in law Mr. John M Spicer talking about a hunting trip he made to the “Bungalow” I also have this as a pdf. If it is too small to read you can view it by clicking here.I know I have only scratched the surface of the wonderful history this property has hidden, and there is a lot I have uncovered that I haven’t gotten around to adding to the site. Only time will tell what all we uncover in our trips out to the property. 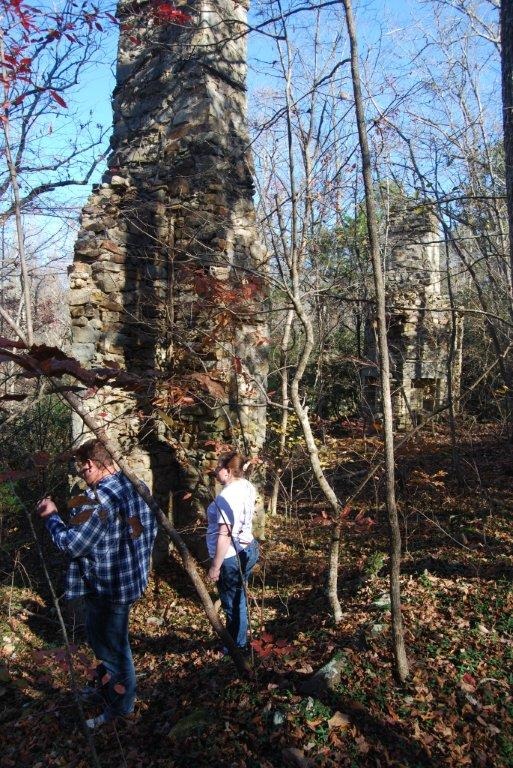