Tiny cabin in the woods 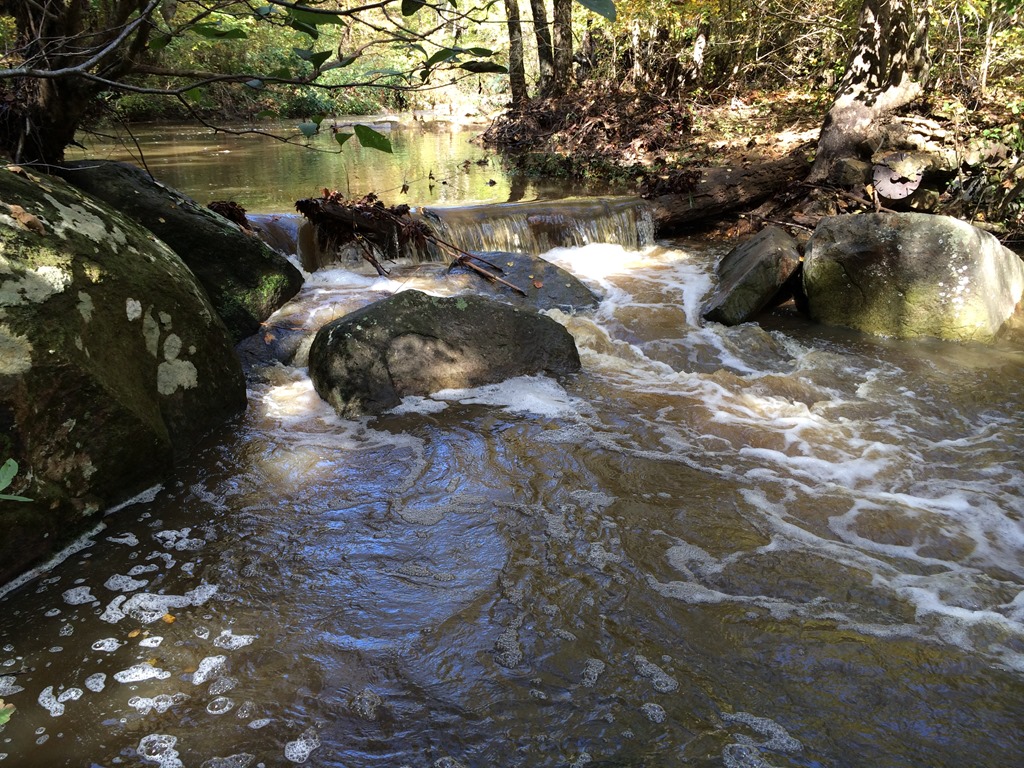 We’ve been wanting to put a small cabin out on our property for a while now. Over the last two years I have bought one set of plans for a small cabin, then ended up totally redesigning it with google sketchup. We pondered over building it for a while and finally decided it would just cost too much and was too big for me to build by myself. I ended redesigning something that I felt I could build by myself If I had to and was just big enough to fit my small family comfortably. It should sleep six people once completed with a fold out sofa on the lower level and two full size mattresses on the loft portion. 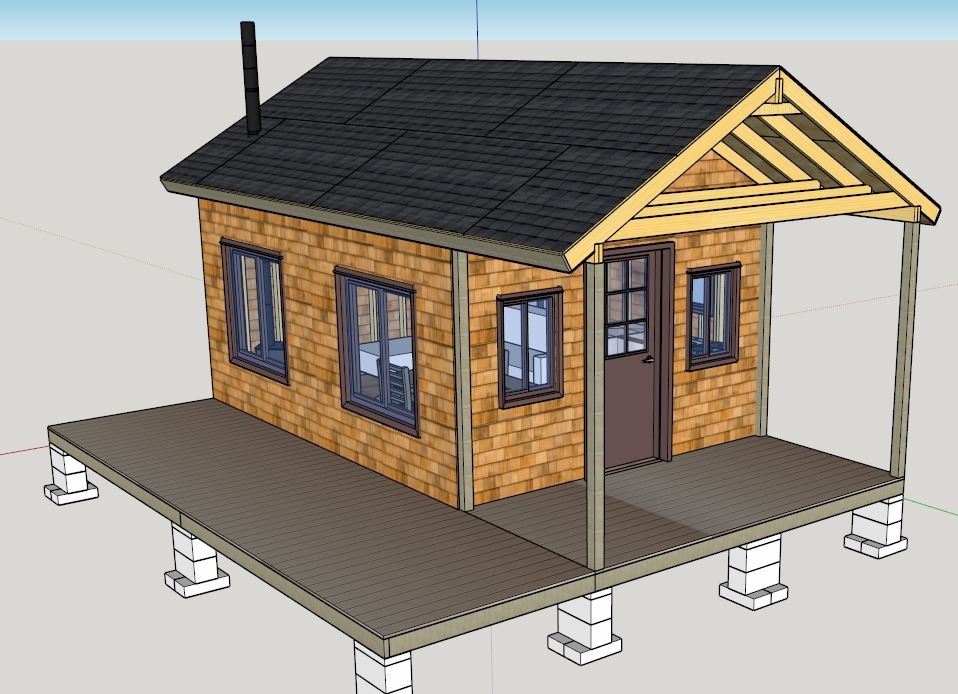 I ended up designing this small cabin to be a 12 x 16 structure with a 6 foot deck along two sides. I extended the roof out to make a small covered porch for when it is raining. The idea is to add another covered porch along the long deck at some point in the future, but I wanted to keep it as simple as possible for now in order to increase my chances of completing it in a timely fashion. 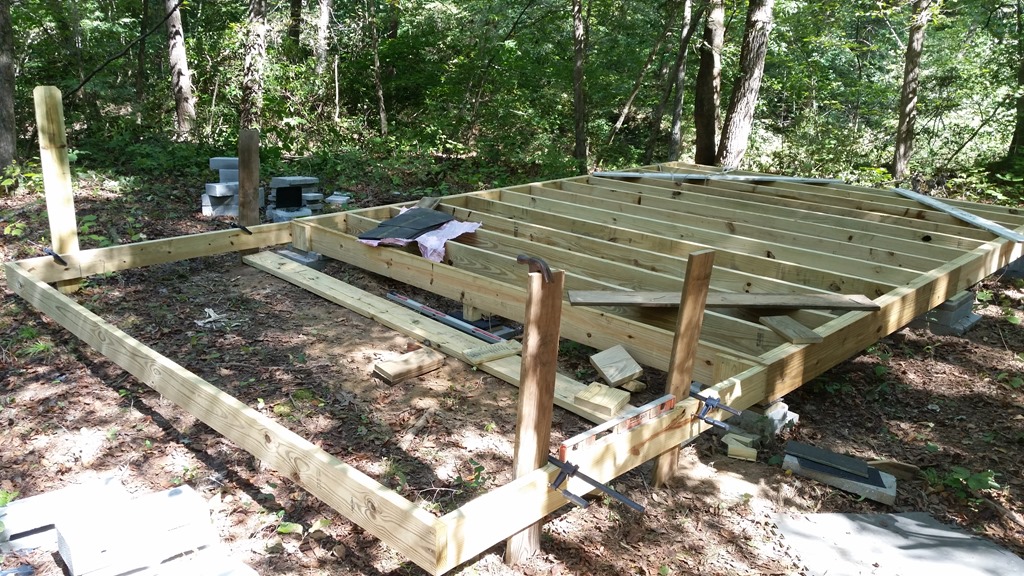 I used a method to quickly square up and level each frame using a few clamps and scrap boards. Measuring from corner to corner once leveled and ensuring the measurements are both accurate and exactly the same will give a good square foundation. I added floor joists and repeated the squaring and leveling process and finally added some corner braces to make sure it didn’t move while finishing up the deck framing. This method works pretty good on smaller structures like sheds and such and keeps you from having to use the string method…which I find tedious and annoying

One thing I haven’t mentioned is that this shed was built with no common utilities available. Electricity was supplied by a 2000 watt inverter and two deep cycle marine batteries. The down fall of this setup is it couldn’t power my air compressor… The two thirty pound boxes of nails you see in this picture were essentially empty at the end of this project and all driven by hand. The deck and sub floor have over 900 nails in it! Doing something like this reminds you just how handy air nailers are… 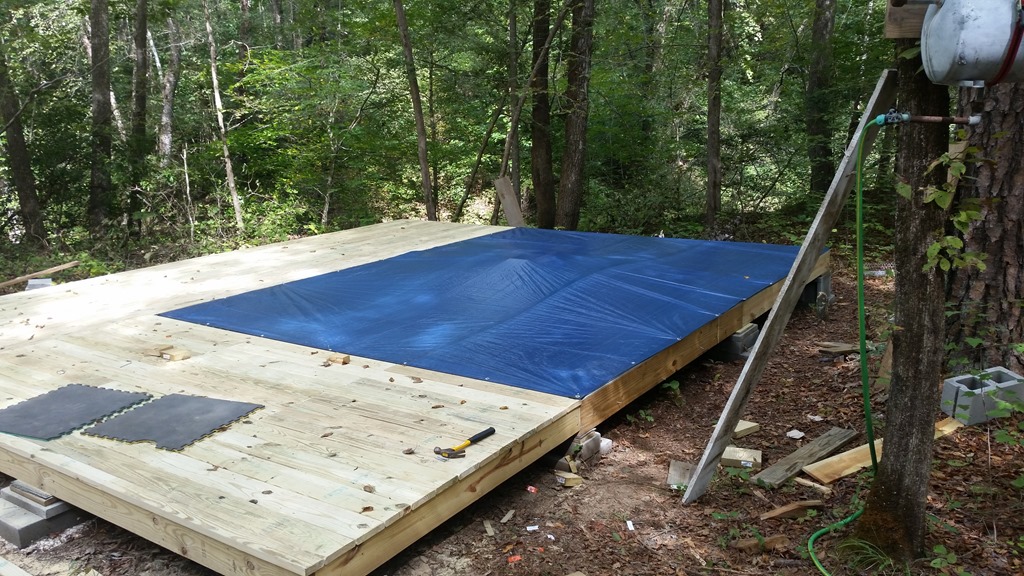 I still had a little more planning to do at this stage so I prepared to leave it for a couple of weeks while tackled the logistics involved in doing something like this without having to make multiple trips to the…not so local … hardware store. I bought a 12 x 16 tarp and secured it to the foundation with nails and left the two nail pails in the center of the floor so rain water would hopefully run off the sides. This seemed to work okay, I know we had at least one rain storm before I got back out to uncover it. 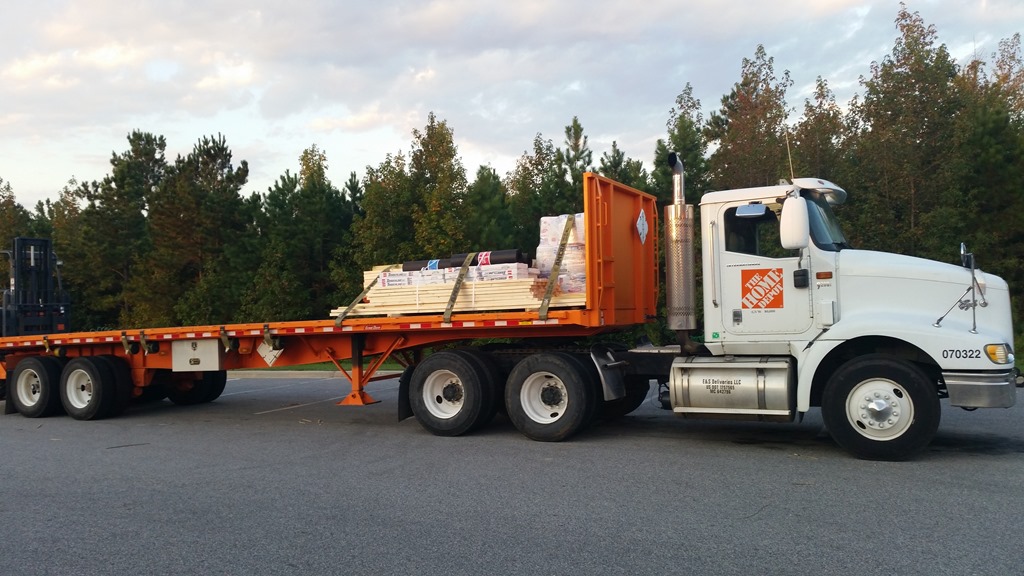 After filling up a home depot shopping cart and scheduling the delivery to my property deep in the woods down narrow winding streets…this is NOT what I was hoping to see delivering the material…no way is that guy going to make to my property with that huge rig…but he did. A fifty dollar dollar bet that he couldn’t drive his fork lift and material all the way down the hill to my building site is all it took to get the material walking distance from the cabin 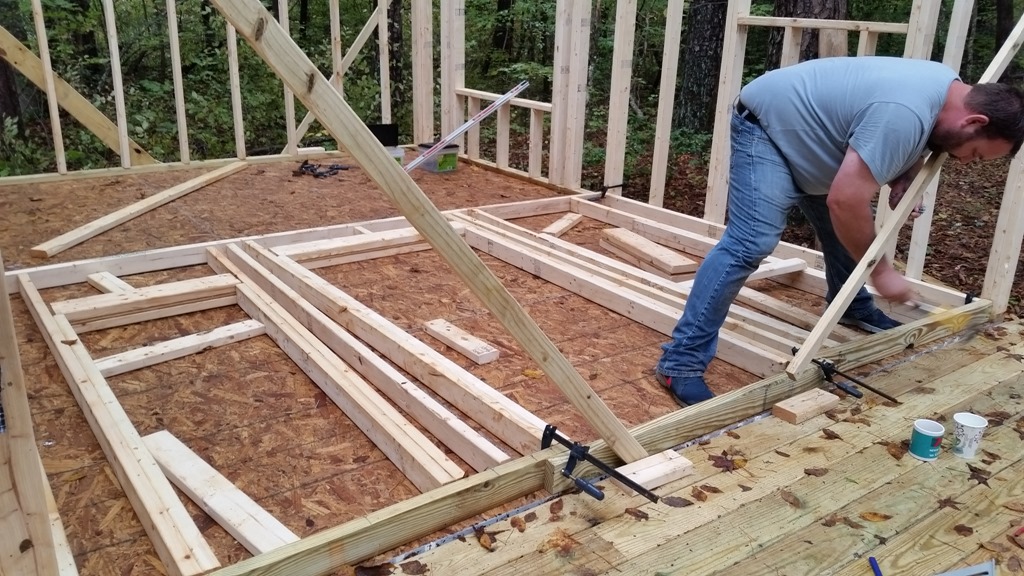 When I designed this cabin I didn’t make the plans up in the conventional way. Using a combination of plugins for Google sketchup and tedious measurements for everything, I was able to cut out every board before nailing anything together. The Cutlist plugin even told me what parts I needed to cut out of every board to keep my scrap wood to a minimum. I ended up trying to separate the plans into separate jobs. For example each wall was a separate job and came with it’s own cut list and number of boards needed. This method worked much better than I had anticipated. The only downfall was if I had to jump ahead or do a portion of one job like when I built the beam and put it in place…it should have been separated into its own job with its own cut list, but I managed to keep track pretty good for the most part. 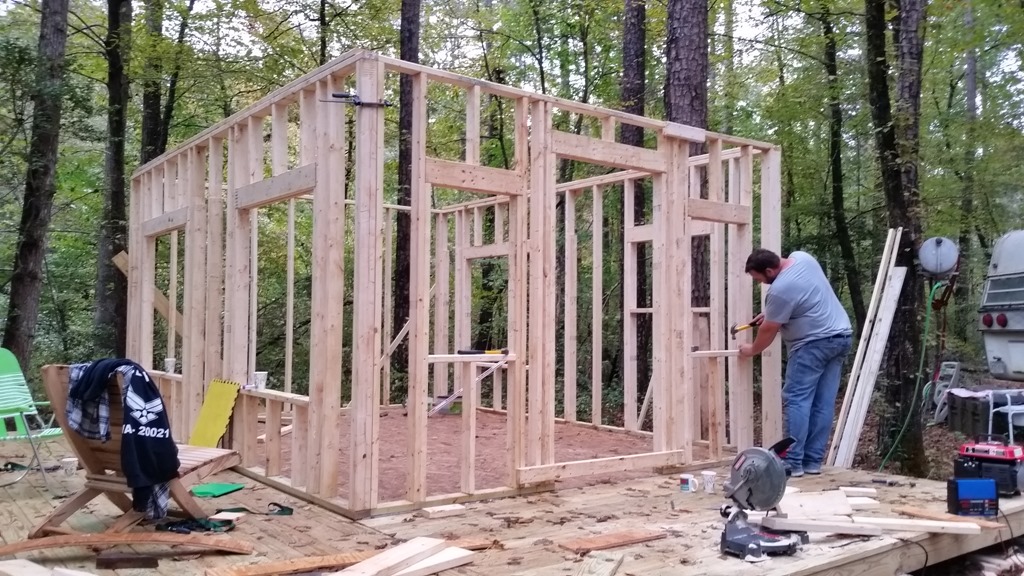 Things seem to slow down quite a bit when you are trying to work between rain showers and are forced to use the ole hammer to drive every nail. It took me and my family a day and a half to get the four walls up. It has been a long time since I drove that many nails. The whole time I was out there working I kept thinking of my Grandpa and me helping him build various projects. I think it was the massive 16 penny galvanized nails that brought those memories back. Sometimes it is good to get back to basics…makes you appreciate what you have and sometimes take for granted. 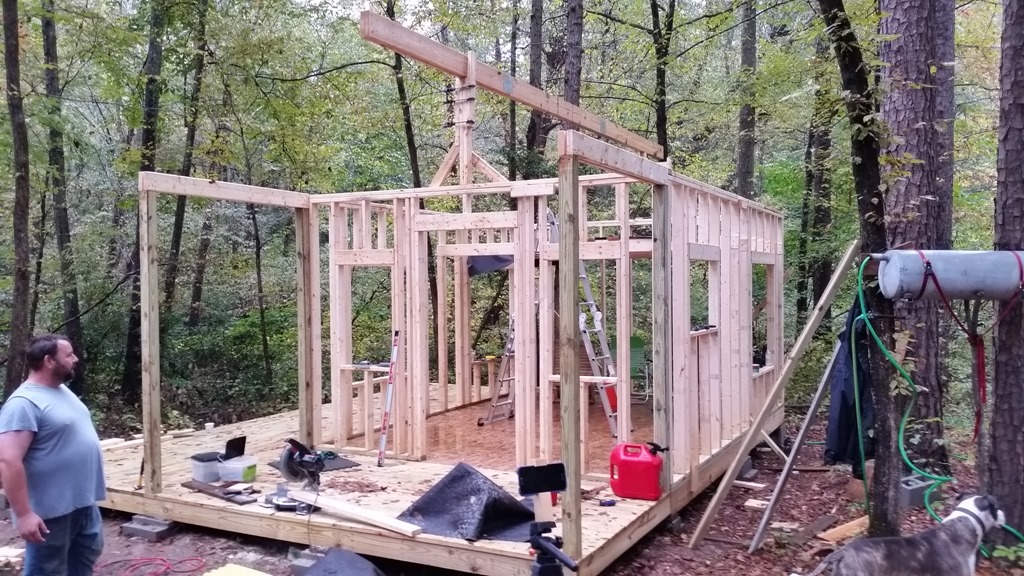 After an extremely rainy and miserable day and with the help of a friend from work and my middle son we managed to get the main roof beam lifted and set in place. It seems like everytime I had good help out there it just down poured. We ended up having to work in the rain just to get this much done. 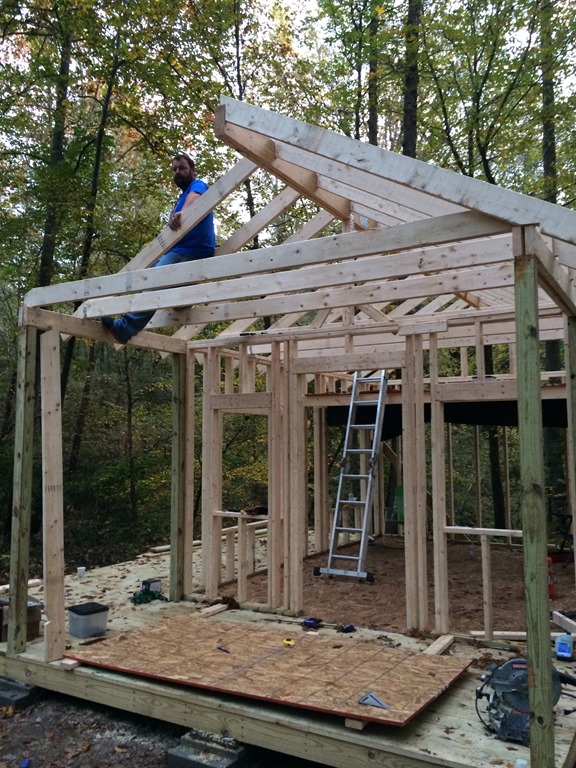 The first sunny day out there I spent alone…wishing I had the help of everybody who was there over the weekend, but I still managed to cut out all of the roof rafters and get all but two installed by myself. The way I designed the rafters helped out because they would just sit in place without me having to hold them. I could tap them around to get it lined up and drive a nail to hold it in place, then toe nail them permanently in. 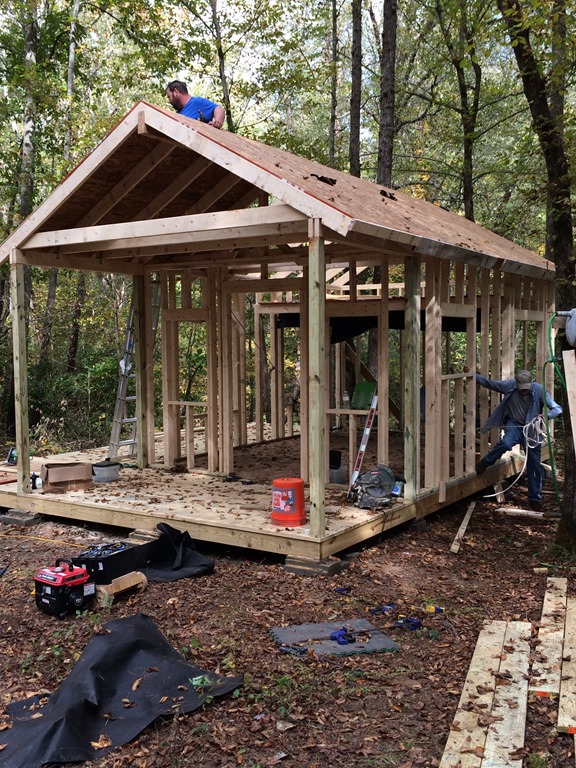 Thankfully my wife and in-laws showed up the following day…just in time to help get the overly heavy plywood lifted up on the roof. There is no way I could have done that by myself. 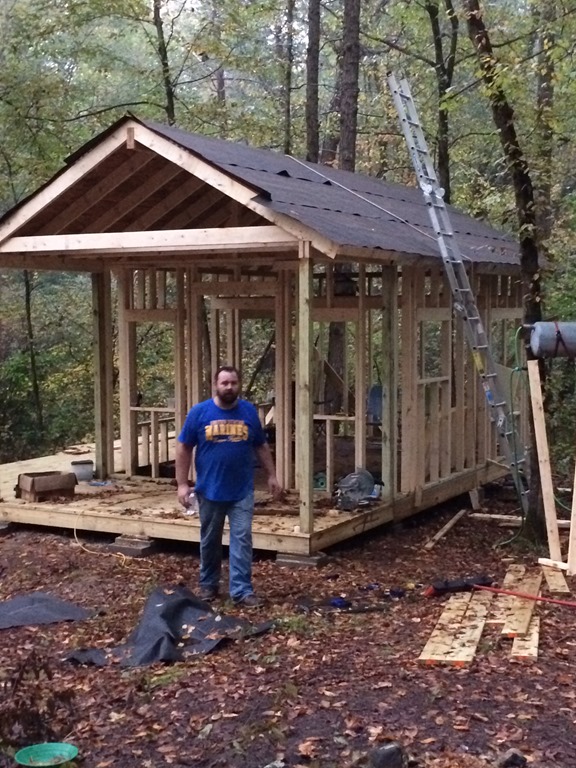 This was the end of the hardest day of work I spent out there. It was all I could to muster the energy to get some tar paper on the roof. There was heavy rain forecasted for that night and next day and I needed that done. I wish I could have had the walls in place too, but that is part of the order from home depot that got missed… Oh well, I was too pooped at that point to do anything else anyway. 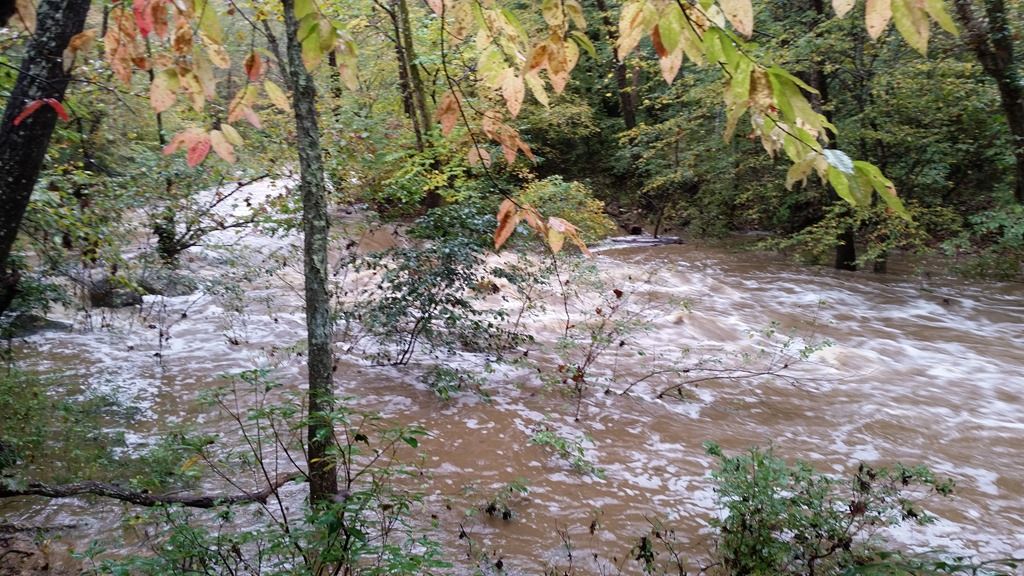 The little creek I built the cabin next too rose nearly 8 feet over that night and morning. It did some serious raining…Wednesday was a washout. I took that opportunity for a hotel stay and hot shower and boy was that nice after 5 days of miserable weather…okay 4 days, Monday wasn’t that bad. 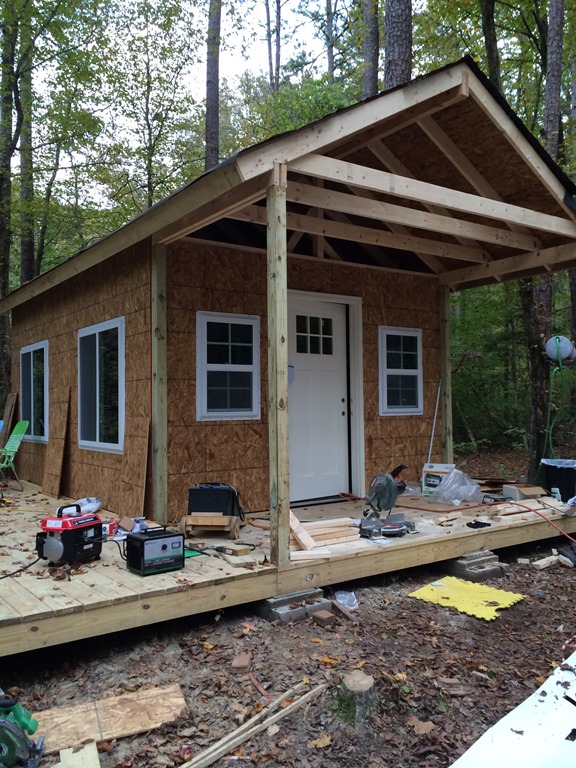 With the visit to town I was able to swap out the windows they delivered that were wrong (partially my fault) and pick up the sheathing for the walls that was missed. Over the next few days my wife and I installed all the windows and door, finished adding collar ties for the roof which I had skipped in my hast to get some plywood up, wall sheathing and a few other odd and end stuff. 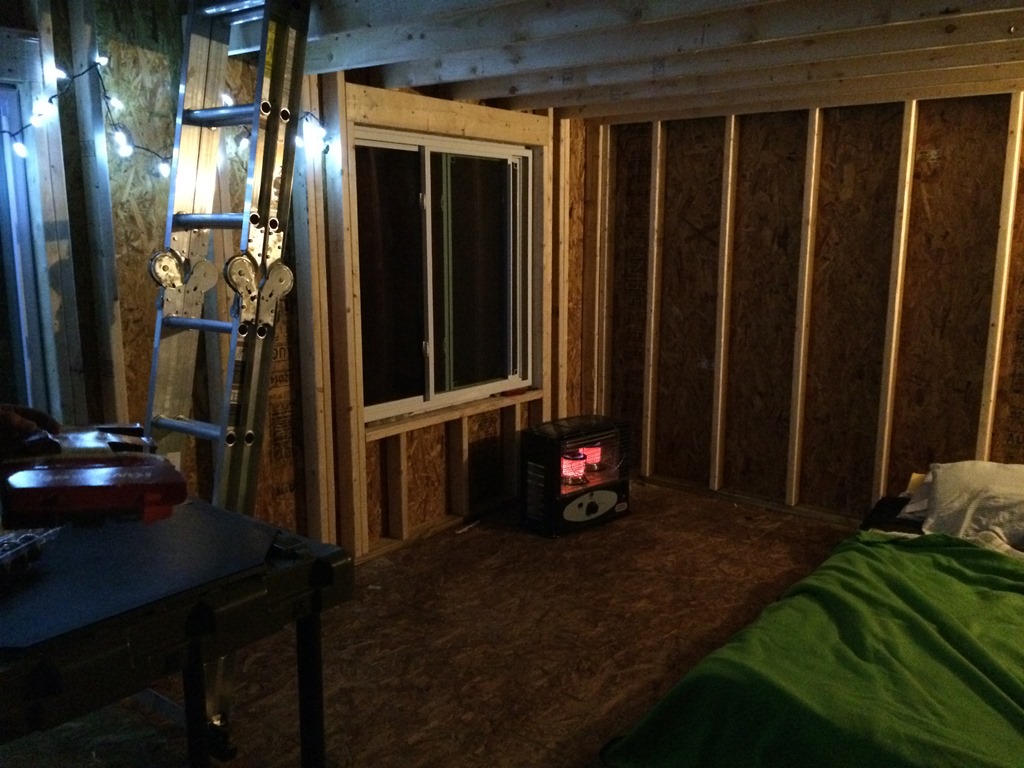 We spent the last two nights in the new cabin…what an improvement over the crappy camper I have out there….can’t wait to finish the inside. 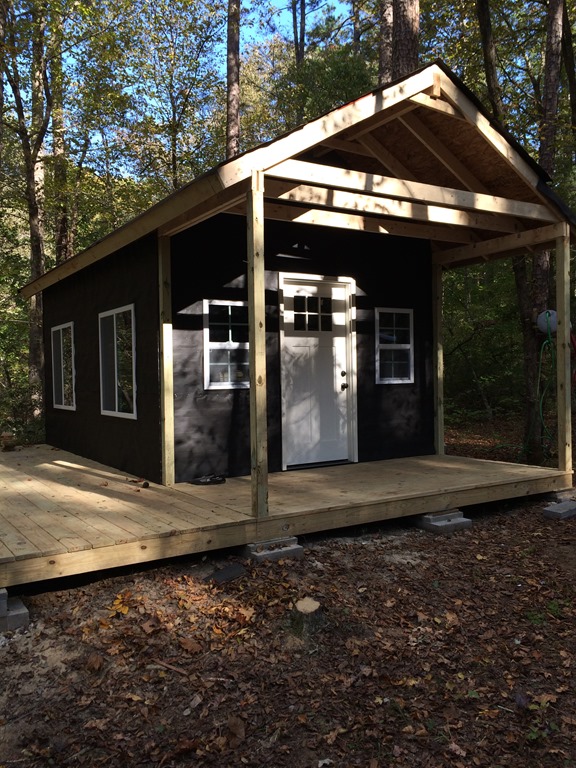 By Saturday afternoon we had it sealed up with tar paper and cleaned back up from all of the construction mess. Hopefully it will be okay over the next week till I can get back out and finish the roofing, siding and insulation. 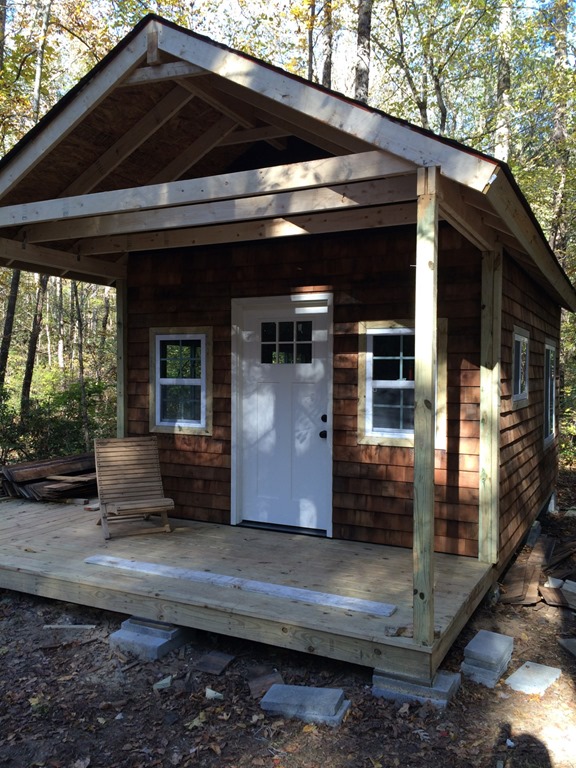 I made it back out the following weekend and managed to get the roofing put up and a little under half of the siding…now it’s time for a break. I am taking next weekend off 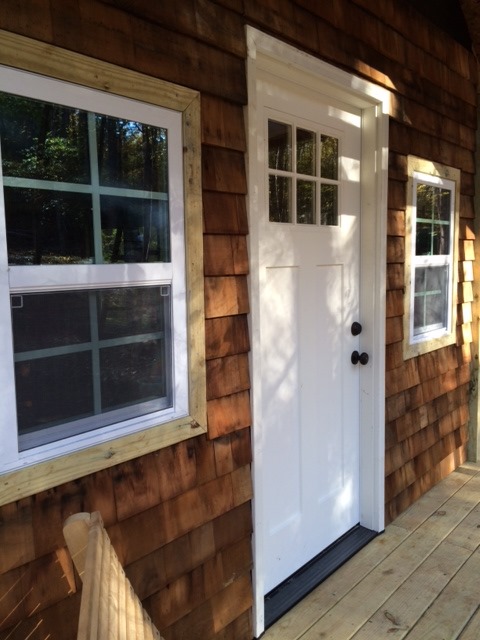 The cedar siding does look nice, can’t wait to finish it.

You can download the plans by clicking the button bellow